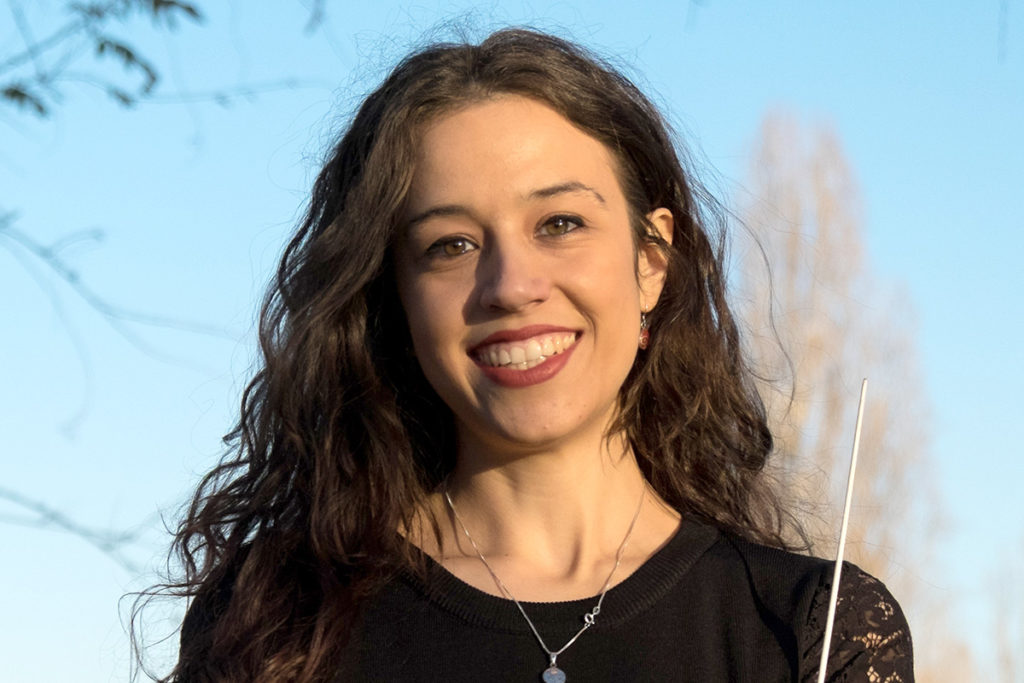 Sara Caneva, born in 1991, graduated with distinction in Composition, Piano and Orchestral Conducting respectively at the Rome “S. Cecilia” Conservatoire and at Milan “G. Verdi” under the guide of V. Parisi. In 2015 she got the Erasmus scholarship as visiting student in Orchestral Conducting at the Musikhochschule Stuttgart, where she worked under the guide of P. Borin and was selected for the Dirigentenppodium Baden- Württenberg. Immediately after, she won the “Fabbrica Young Artists Program” 2016- 2017 at the Teatro dell’Opera di Roma. In the same Theatre, she conducted the premiere of a contemporary opera diptych, including her work On-Off, commissioned by the YAP.

She went in depth with her training in both Conducting and Composition, through masterclass with conductors such as J. Stockhammer, P. Eötvös, G. Vajda, G. Noseda, C. Metters, E. Nicotra, and G. Gelmetti at the Accademia Musicale Chigiana. After debuting with L’Elisir d’amore in Orvieto in 2014, she collaborated with the Danubia Orchestra Óbuda at the Budapest Music Center, the Savaria Symphony Orchestra, the Berlin Sinfonietta, the Ensemble ‘900 from Accademia di Santa Cecilia, the IEMA Ensemble within the Festival Klangspuren Schwaz, the Youth Orchestra from Teatro dell’Opera di Roma, among the others.

She conducted a number of world premieres and acted considerably in the field of contemporary music. She has been the assistant conductor to V. Parisi at the MiTo festival 2015 and at the Philharmonia M. Jora Bacau in 2018. In the same year, she was semifinalist of the G. Facchinetti Conducting Competition. In 2016 she founded the Ensemble Formanti, focused on new music, of which she was conductor and artistic director until 2017.

In December 2018, she conducted the final round in the “Michele Novaro” composition competition, taking place at the Quirinale and live broadcasted on Rai Radio3. Among her next commitments she will lead the Orchestra Regionale Toscana in Florence and the Schallfeld Ensemble (AT) in an international tour.